One tour. Three bands. Two cities in wonder. After wrapping up a wildly successful tour with UK pop-rock sensations, The Wombats, Future Feats once again hit the road. Consisting ofJosh Quinn (vocals/guitar), Ben Havok (guitar), Partick Retzer (guitar), Michael Taylor (bass), and Zach Zoellner (drums), this Los Angeles based quintet brought their phenomenal live performance and glowing charisma to a few lucky cities across the U.S. before ending their run in British Columbia. They joined The Soft White Sixties and Public Access T.V., on a spring tour that spanned just over a week yet epitomized the phrase “short but sweet” as all three groups brought their own flavor of show-stopping energy and excitement to the stage. This enthusiasm was especially felt during the middle stops along the tour. The San Diego House of Blues and the Constellation Room at the Observatory Santa Ana are known for their intimate feel and close interaction between artists and audience. Rather than ignore this quality, Future Feats used the more intimate space to interact, tell jokes, and craft a show that radiated a sense of honesty and raw unedited emotion. 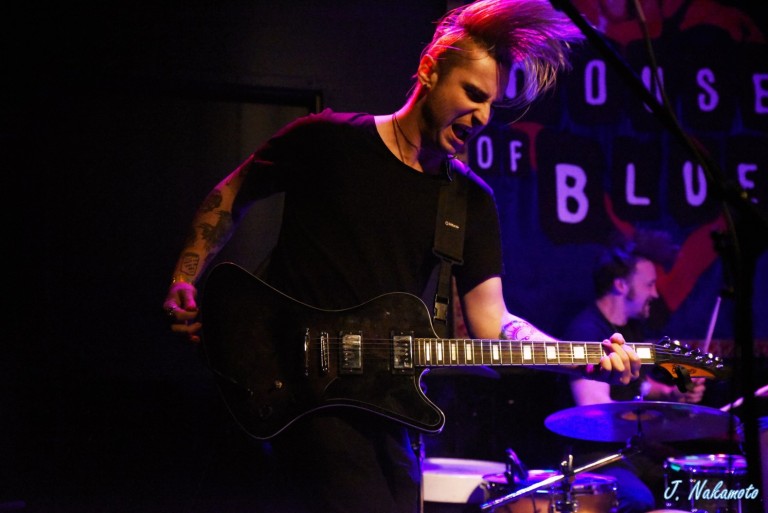 While their recorded music reflects a more synth-pop-style composition, Future Feats’s live shows are a blast of high-energy alternative rock. Fan favorite tracks such as “On Diamonds” are laced with an abundance of catchy guitar-heavy riffs and drumlines that keep both artists and fans dancing to the beat. The band also put their versatility on display as Quin broke out his acoustic guitar for sections of the song, “The Time We Live For.” These melodic segments beautifully highlighted and contrasted the rebellious aspects of the track. Lines such as, “if we all die young, we’ll never grow old” and “we’ll break into the great unknown” constitute a type of reckless abandon that especially hit home with their youthful relatability .

With their set, Future Feats painted a stunning picture of both the highs and lows of human existence that took listeners on an emotional journey of realization and discovery. Looking out at the cheering crowd, it was clear to see that the group easily succeeded in forming a special bond between artists and audience. In fact, it’s often the ability of musicians to leave viewers feeling more like family than simple attendees that really stands out in today’s modern world. In this sense, Future Feats have crafted the perfect live atmosphere.

In addition to their captivating live show, the lyrical mastery that the band demonstrates is yet another way Future Feats stands out from the rest of the musical pack. Narrating the life story of lead vocalist, Josh Quinn, each track holds both a memory and a lesson. Following the ups and downs of Quinn’s (not always easy) road, the lyrics of songs such as the newly released “Same Mistakes” (2018) and “Cities in Wonder” (2017) are tracks in which listeners can find themselves lost in a trip down memory lane. The journey of stumbling along one’s path and finding the strength to pick oneself up after every fall is not only relatable, but provides a unique inspiration to confront all the challenges life may throw. Lines such as “I’ve made a life out here and I’m not going back” (Cities in Wonder) and “you may be all it takes / keep me from making the same mistakes” (Same Mistakes) radiate a defiant proclamation of triumph over the hardships that work to hold us back. It’s through songs like these that we can all find hope to break out from our distinct personal cycle of same mistakes and emerge in our own paradise of sorts.

Indeed, the wholesome feeling that comes from viewing one of Future Feats’s live shows is evident by the smiles that lit up the faces of each audience member. Standing in this band’s presence, fans couldn’t help but feel the gratitude, joy, and positivity each member exuded as they danced their way through the night. In essence, any city lucky enough to welcome this group of talented musicians is undoubtedly, one left in unquestionable wonder.

Harkening back to an era abundant in musical exploration, alt-rock bands, The Soft White Sixties, and Public Access T.V. both succeed in catching the attention and hearts of fans with their throwback charm. Strutting around stage with their golden cufflinks and dabbling in the lost art of fringe-clad outerwear, these groups gave off a retro swagger that highlighted their 60’s inspired tracks. It was a fun twist for audience members to dance along to groups that not only sounded, but looked the part. While it may have been easy to feel swept away by fun moments such watching Octavio Genera (lead vocalist for The Soft White Sixties) slide across stage (a signature move that uniquely crossed somewhere between the electric slide and a Michael Jackson moonwalk), the music produced by these two bands was equally captivating. Accompanying their strong vocals were an equally impressive set of guitar stringwork and uptempo melodies. While they definitely belong in the alt-rock category, the nostalgic mod influence each band incorporates into their performances gives them a distinct flare. In other words, they are definitely two groups fans won’t want to miss.